The Duluth Drag Race and Car Show is growing bigger each year, both when it comes to the number of participants and the number of spectators. Well over 100 drivers participated in drag racing at the most recent event.

The Duluth Drag Race and Car Show is a 2-day long event, typically taking place over a weekend in mid-September. 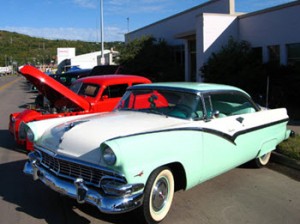 The Duluth Drag Race is a street race, which means that no special drag race track is used. It’s a 1/8 mile long race taking place on the Garfield Avenue in Lincoln Park, Duluth.

Having a legal drag race on a public street is highly unusual in the United States, so Duluth is offering a rare treat for all drag racing enthusiasts.

The car show has even more participants than the race, with 300+ cars being on display during the most recent event. During recent years, there has been in increase in the number of muscle cars at both the show and in the race, but many other types of cars are to be seen here alongside the muscles – including quite a lot of rare and elegant beauties from the 1940s. 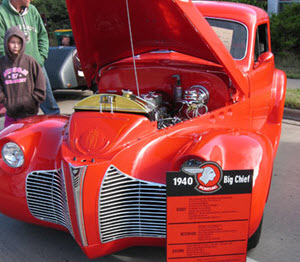 The seaport city of Duluth is found on the northern shore of Lake Superior in Minnesota, very near Canada. Duluth is one of the largest metropolitan areas in Minnesota in terms of population.

Situated at the westernmost point of the Great Lakes, Duluth became an important port town in the 1800s. Today, oceangoing vessels from the Atlantic Ocean can go all the way to Duluth via the Great Lakes Waterway and the Saint Lawrence Seaway. 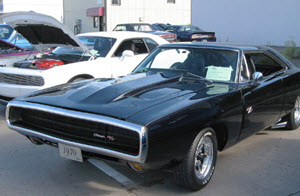 In the 1950s, ore shipment from Duluth harbor decreased dramatically since the nearby high-grade iron ore ran out. In 1981, the U.S. Steel Duluth Works plant was closed. Since then, the local economy has shifted over to tourism. Duluth is a popular starting point for vehicle trips on Highway 61 along the scenic shore of Lake Superior and is also a base for visitors that wish to explore the Superior National Forest and the Boundary Waters Canoe Area. The North Shore Scenic Drive to Gooseberry Falls State Park can definitely be recommended for those of you that are looking for a nice car trip or motorcycle ride.

Duluth has a very strong cruising culture year round. When cruising enthusiast Kyle Smalley died from Lyme disease in 2015, he was honored by over a hundred hot rods and other specialty cars cruising along West Duluth’s Grand Avenue, from the K-mart parking lot to Duluth Denfeld High School. The convoy was led by Smalley’s black Henry-Jalways.

Places to stay in Duluth

The arrangers of the Duluth Drag Races & Car Show work together with local businesses to provide visitors to the event with a good discount. One example of a place that tends to offer a discount is the Edgewater Hotel & Waterpark, located less than 4 miles from Garfield Avenue. This hotel has great parking facilities, even for big vehicles and trailers.

Many car enthusiasts that visit Duluth Run spends their night drinking and gambling in one of the two casinos in Duluth.

I recommend that you learn how to play before you go.  People visiting the Duluth run are nice but they might tease you a bit if you do not know how to play.   Find an online casino that allows you to learn how to play without spending any money.

Duluth is also served by Skyline Shuttle with daily service from the Minneapolis-Saint Paul International Airport.