Run by the HOT ROD network, the 2016 Hot Rod Power Tour has revved up and crossed the USA. Now in its twenty-second season, the event brings together automobile enthusiasts from across the country in a grand tour of classic and souped-up vehicles, muscle cars and custom builds. 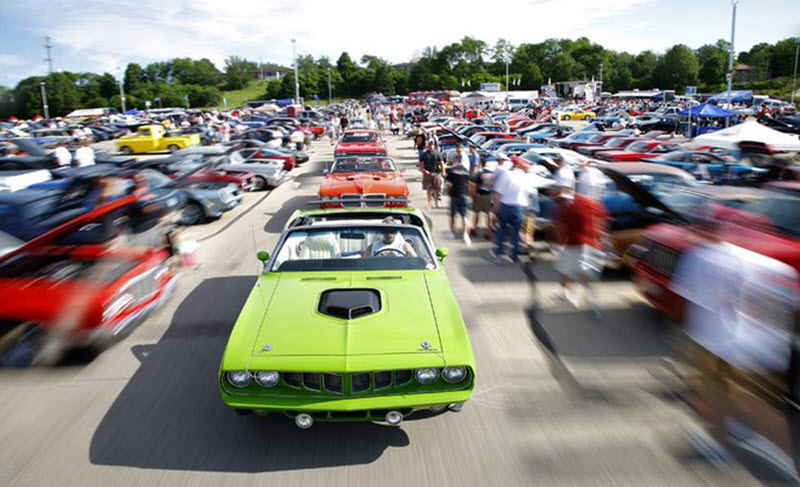 Run from June 11th to 17th, the Power Tour is a road trip with a difference. Avoiding the interstates, the convoy of classics travelled from Baton Rouge, Louisiana, to Kansas City on rural highways through small towns, to explore the country’s lesser-seen landscape. Sites of particular interest to the auto enthusiast are rallying points for the tour’s participants.

The 2015 tour saw well over 6,000 participating drivers join with it on scheduled stops, and 2,120 of those vehicles were part of the Long Haul Gang for the whole week’s events. Estimates put the number of spectators for the tour at 116,000. 2016 looks set to outstrip those already impressive numbers, as small towns along the 2015 route were jammed with classic and custom cars.

Amongst the sights to amaze onlookers was a custom build with leisure in mind – a picnic table car. Bryan Kordus and John Varga, who had become firm friends at the 2015 tour, got together to build this boxed steel picnic table with a Renault engine, that seats ten diners and travels at a laid-back 5mph. The oddity is not intended for road use, and was transported between venues on a trailer.

Also turning heads on the tour was the Vanderhall Laguna, a prototype of a car intended for production by the Utah-based manufacturer. The sleek lines on this two-seater were not the main focus, as it’s a three-wheeled automobile, two at the front and one on a swing-arm at the rear, with a 1.4L Chevy engine. Movie fans might also have been forgiven for mistaking the chopped Datsun with a small black Chevy engine protruding from the bonnet, for the Road Warrior car from Mad Max.

The resolve and talent of the Power Tour participants was also on display in the form of a 1958 Chevrolet Apache truck that Leuis Barr and his sons Lucas and Sam resurrected from the scrapheap to bring on the tour. The family trio of gearheads had the junker up and running again in just seven weeks of hard work.

Love me, love my car

The 2016 tour will no doubt be remembered as the tour of love, thanks to a car enthusiast couple who used the festivities as the setting for their nuptials. Texans Warren and Desiree Benchoff had wanted an unconventional wedding and had planned to wed at the Circuit of the Americas in Austin, so having the Power Tour come to town gave them the opportunity. In the presence of over 5,000 unique automobiles and in front of a cheering crowd of diehard car fanatics, the couple tied the knot with personalized vows that reflected their joint passion for motors.

The HOT ROD Power Tour culminated at the Kansas Speedway on June 17th. Registration for the much-anticipated 2017 tour is likely to open in December 2016.