The large car shows – including the “Big Five” held in Frankfurt, Geneva, Detroit, Paris and Tokyo – are huge public relations events attended by industry representatives, car dealers, motor journalists, and the public. They are often the scene of highly publicized automobile debuts and the unveiling of concept cars.

Below you will find a few examples of interesting car shows that tend to attract a lot of “civilian visitors” in addition to industry representatives. 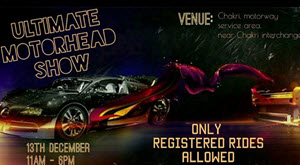 When this show started back in 2010, it was called R&B Wheels Unlimited. During the early years, it was mostly classic cars and muscle cars to be seen, but lately there has been a great influx of other vehicles as well, such as tuners, motorcycles, ATVs and drag cars. Even big rigs and tractors have made appearances.

A centerpiece of the show is the Friday Night Cruise to downtown Bloomsburg. Other examples of popular events during the Ultimate Motorhead Show are the pedal car drag race and the daily ATV races. Local bands provide musical entertainment, and there is also a local flamethrower group to be seen.

Each year, the Ultimate Motorhead Show supports of specific cause. Examples of earlier causes have been cancer research, disabled veterans and the Women’s Center of Bloomsburg. 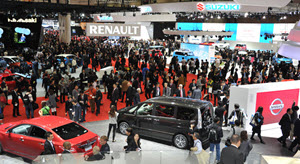 The Tokyo Motor Show is one of the world’s largest motor shows and it is chiefly famous for its focus on concept cars. It is held every second year in October – November and hosted by the Japan Automobile Manufacturers Association (JAMA).

When this motor show premiered back in 1957, it was called the All Japan Motor Show and held outdoors in Hibiya Park. Well over half a million visitors attended the ten day long show, despite the fact that most vehicles on display weren’t passenger cars. Today, the Tokyo Motor Show showcases a broad range of vehicles intended for private or commercial use, including cars, motorcycle and various other commercial vehicles. Auto parts are also on display. 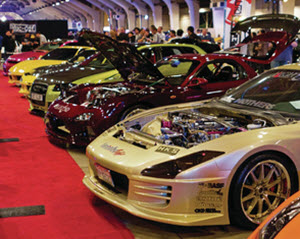 Hot Import Nights (HIN) is for compact and tuner import cars, and includes tuner competitions. A HIN event typically also have hip-hop and rap performances, as well as DJ’s featuring electronic dance music. In a sense, it’s a combination of a car show and a nightclub party.

HIN originated in California, USA, but today HIN events are held in other locations as well – all under the auspices of the Hot Import Nights Company, which is based in Orange County. Example of locations within the USA where HIN has been held are Los Angeles, San Mateo, New York, Boston, Miami, Chicago, and Honolulu.

During the Woodward Dream Cruise, classic cars gather along Woodward Avenue in Metropolitan Detroit, Michigan, USA. The event typically starts at Pontiac, runs through Ferndale, and then continues to the State Fair Grounds, just south of the 8 Mile Road.

The Woodward Dream Cruise takes place annually on the third Saturday of August, and typically attracts well over 1 million spectators to watch about 40,000 cars. The line up typically includes various custom cars, muscle cars, street rods, collector cars, and more. Vehicles of all eras, brands and models are welcome, but a majority of the cars tend to be cars built in the United States between 1950 and 1975, or cars that resemble these cars in style.

Even though the Woodward Dream Cruise is labeled a one-day event, the festive spirit is noticeable much earlier than the 3rd Sunday of August, since vehicles begin to arrive well in advance. Also, several of the nearby communities are holding ancillary events in August.

The first Woodward Dream Cruise took place in 1995 to help raise funds for a children’s soccer field in Ferndale. The organizers expected somewhere around 35,000 spectators to show up, but the real attendance figure turned out to be in excess of 250,000 people.

This four day long automotive festival takes place in Worcester, Massachusetts, USA each year. It is normally held in conjunction with the 4th of July celebrations. Examples of popular features are the stunt motorcycle riding, the drag racing and the controlled burnouts. The New England Summer Nationals usually draws at least 75,000 spectators, making it one of the major automotive events along the U.S. East Coast.

Power Big Meet is held annually on the Johannisberg Airfield in Västerås, Sweden on the first weekend of July. Nowadays, it is a four-day event running Thursday – Sunday. One of the highlights is the Friday Cruise when classic U.S. cars cruise through the streets of Västerås.

Concorso d’Eleganza Villa d’Este is an elegance contest for classic and vintage cars. The contest, dating back to the late 1920s, takes place at Villa d’Este, a Renaissance patrician residence in Cernobbio on the shores of Lake Como, in northern Italy. The event is comparatively small, with a total of approximately 50 participating cars. Since 2011, the contest has been held in the second half of May. Up until then, the traditional time for the Concorso d’Eleganza Villa d’Este was the last weekend on April.

Truckfest is a transport festival focused in trucks and the haulage industry. Among the highlights are monster trucks and customized trucks. The main Truckfest is held at the East of England Showground in Peterborough, but smaller Truckfests are also arranged in various other locations within the United Kingdom, including Kent Showground, Royal Bath and West Showground, Royal Highland Centre, and Haydock Park.