The roads from Hebron, Ohio to Indianapolis and back will see America’s Fastest Street Car and all her competitors for that title, roar past from September 11 to 17, 2016. The event is Hot Rod Drag Week, a competition in which street or strip cars will be driven over a thousand miles on public roads. The drivers will hit four different drag strips and compete in five races over the five days, with the fastest overall time winning the honours for car and crew. Considered to be the ultimate test of a street/strip car, the race requires the participating vehicles to be without any support vehicles, so any mechanical problems encountered must be overcome with the crew’s wits, skill, and often the sportsmanlike assistance of other competitors. 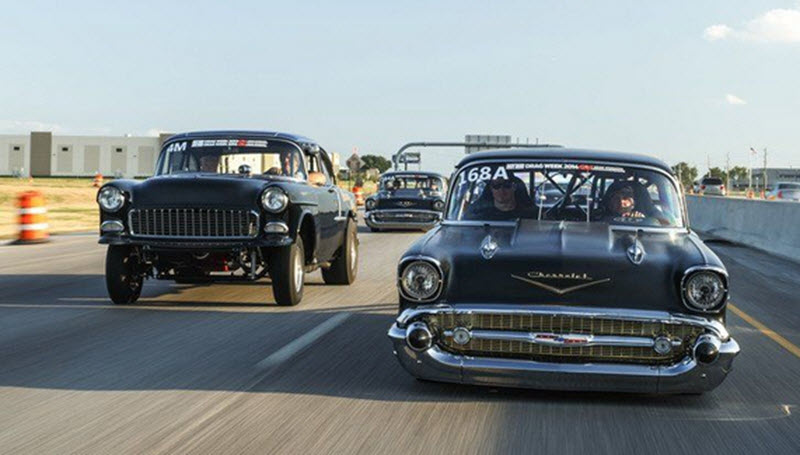 Participating vehicles are divided into nine classes, including Pro Street, Modified, Super Street, and Ultimate Iron. Trophies are at stake in each category, but the big prize of being crowned America’s Fastest Street Car could go to any one from any class. There are also awards to be won for reliability; drivers confident in their ride’s condition can request to have their hood or engine sealed at registration to prove that their machines can handle all the week’s exertions without any tinkering. While all eyes are on the big prize, the next highest honour is the Spirit of Drag Award that will go to a competitor who shows the best sportsmanship or attitude over the week; it’s not all about speed.

Starting out at the National Trail Raceway in Hebron, the first day of racing is September 12th, with the previous day dedicated to testing and tuning of the super powered machines. Even as the dust settles on the Hebron track, the drivers must set off on a 100-mile trip to the next day’s venue – The Summit Motorsports Park in Norwalk. This second day’s racing is likely to see drivers winning entry into the Drag Week 200 MPH Club, if they hit speeds in excess of 200MPH in any quarter mile of the track sections; bragging rights are also at stake for whoever records the highest 200MPH+ pass of the week.

Day three requires the racers to negotiate the public roads on a 235-mile road trip to Martin, Michigan, where they then must keep their concentration for the track race event at US 131 Motorsports Park. After that long haul, another awaits; day four’s race is at the home of speedway – Indianapolis. This will require the drivers to make another long trip of 246 miles before the serious business of racing even begins at the Lucas Oil Raceway. The event culminates back in Hebron, Ohio on day five, where the honours will be bestowed on the winners. But not before another event at the National Trail Raceway that follows the 200-mile haul back to Hebron.

Despite the increased capacity of 2016’s Drag Week to four hundred cars, the event still sold out in just over seventeen minutes. Even the waiting list for hopeful participants has become full, showing the popularity of an event that is as much about driver endurance as the enduring charm of the souped up Hot Rod.